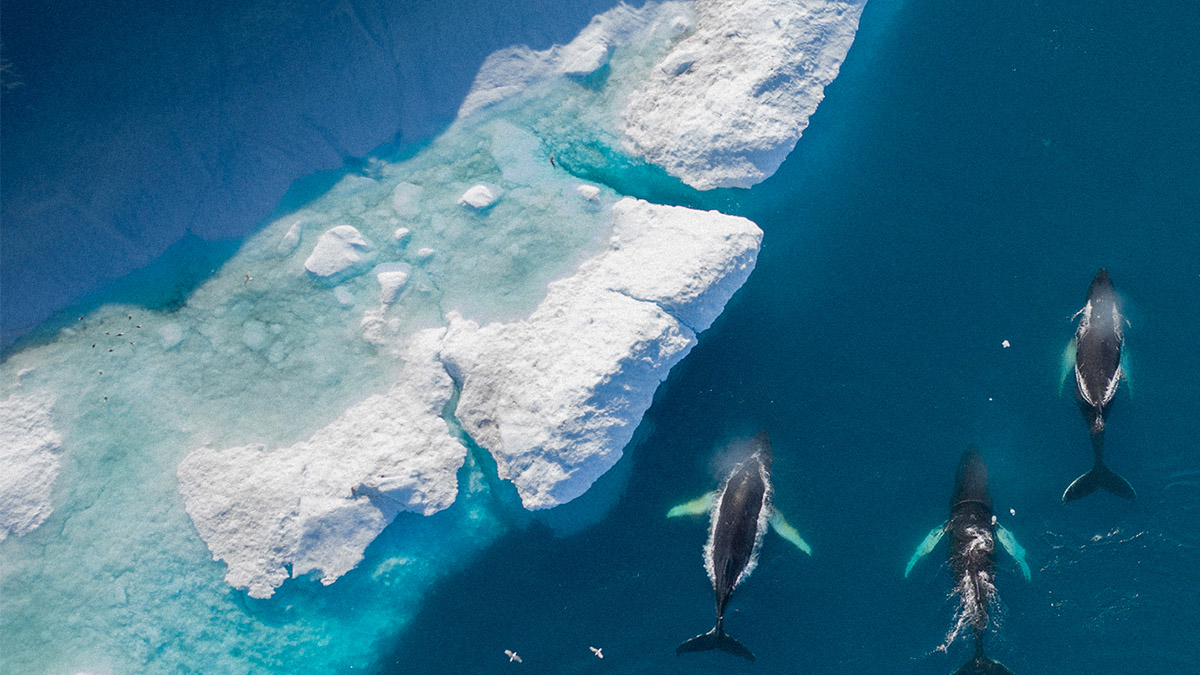 For its first edition, the Aerial Photography Awards 2020 (​aerialphotoawards.com​) invited photographers from around the world using drones, helicopters, kites, balloons or airplanes to submit their best photos in an attempt to win $10,000.

The competition received thousands of entries from 65 participating countries. ​The prestigious Jury​, who voted without knowing the name or country of the participants, awarded 106 photos in 22 Categories and 11 photographers in the 6 master Categories.

The awarded photos were selected through a 10-day vote by the ​members of the Jury​. In order to elect the “Aerial Photographer of the Year 2020”, the photographer was selected on the average of the overall scores and the number of winning photos per photographer in different categories. 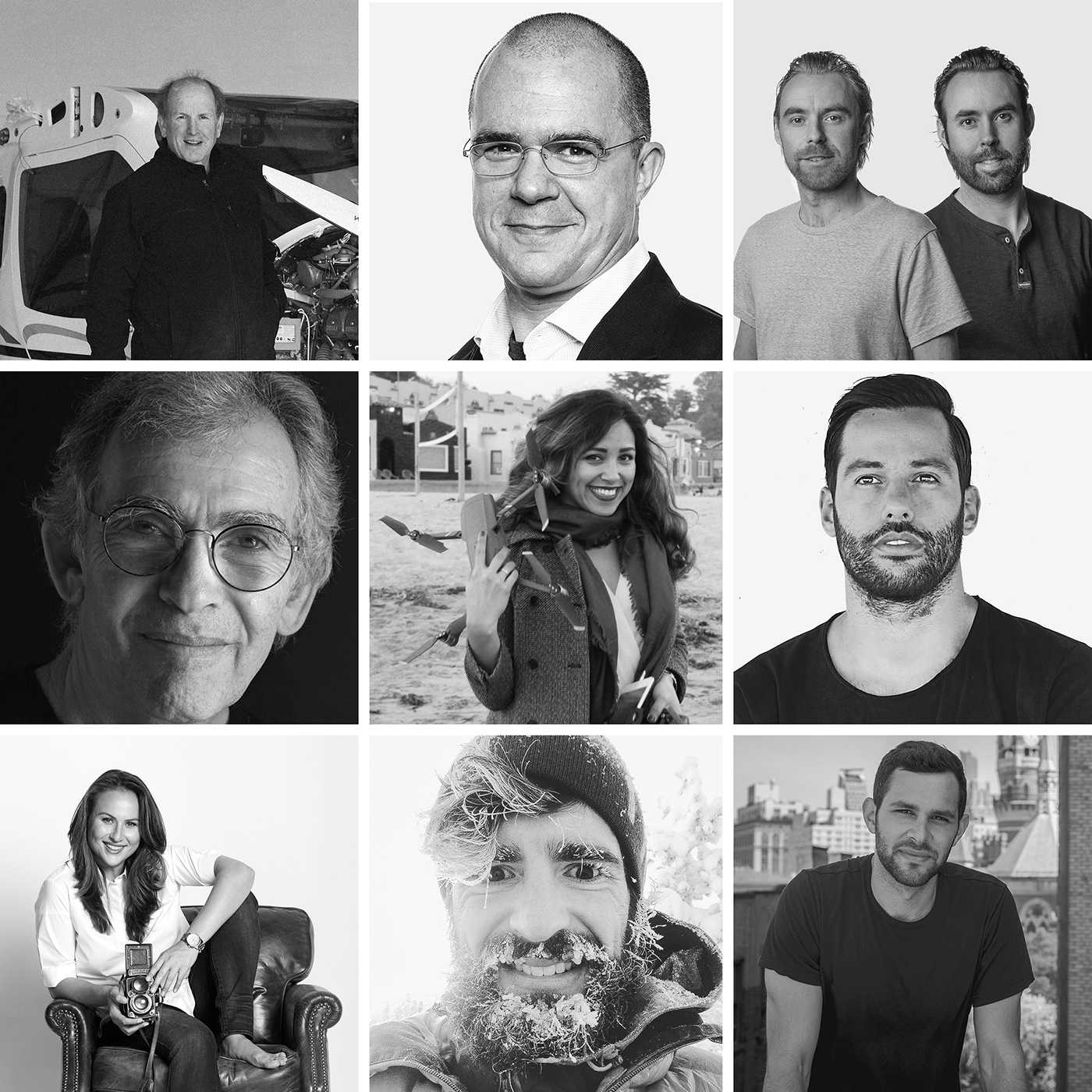 The Jury includes ​Jeffrey Milstein​ who has exhibited in many museums and galleries around the world, ​Daniel Beltrá​, winner of numerous prestigious photography awards, ​Dirk Dallas​, seen as an early leader of the drone movement, ​Alex MacLean​, author/co-author of thirteen books, ​Benjamin Grant​, creator of the popular Instagram feed Daily Overview, ​Peter Essick​, named one of the 40 most influential nature photographers in the world, ​Florian Ledoux​, whose work is recognized by international conservation organisms, ​Hulia Boz​, Aussie photographer who has recently held an exhibition in New York, ​Abstract Aerial Art​, two brothers dedicated to taking bizarre aerial images around the world, ​Noura Al Murr Al Neyadi​, who started photography at the age of 11, ​Costas Spathis​, a Greek aerial photographer widely followed on Instagram as well as ​Elena Buenrostro​, pilot, trainer and leader of the Women Who Drone movement.

Take a look at the winning pictures of the Aerial Photography Awards 2020:

The Lady of the Sea​

In the Daily Life category, “​The Lady of the Sea​”, a photo taken by Vietnamese photographer Duy Sinh, shows a fishing net thrown from a boat, which forms a woman’s face. 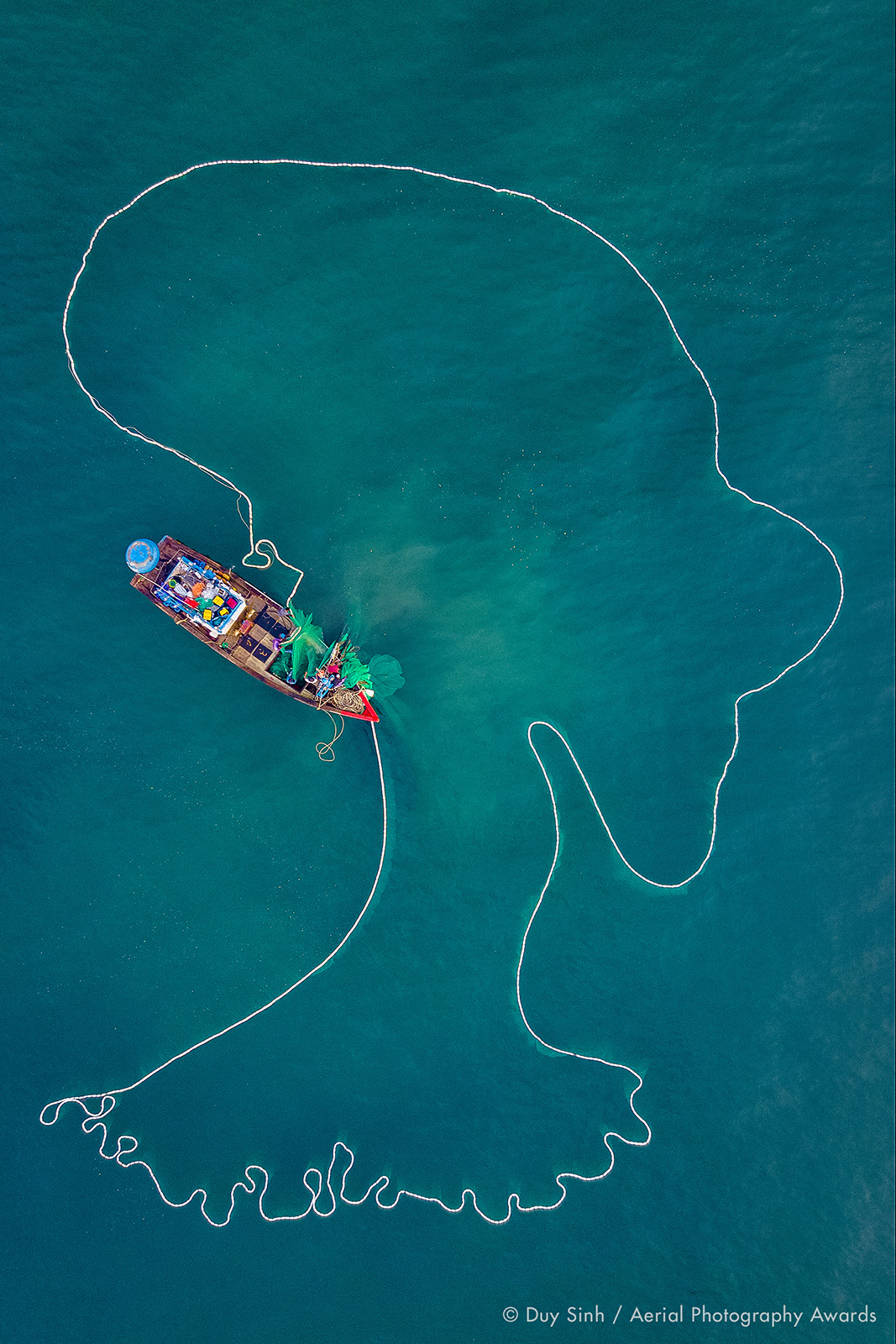 In the Documentary category, photographer Marc Le Cornu takes first place with ​a photo of the Jersey Airport Rescue & Firefighting Service training on a burning plane​. 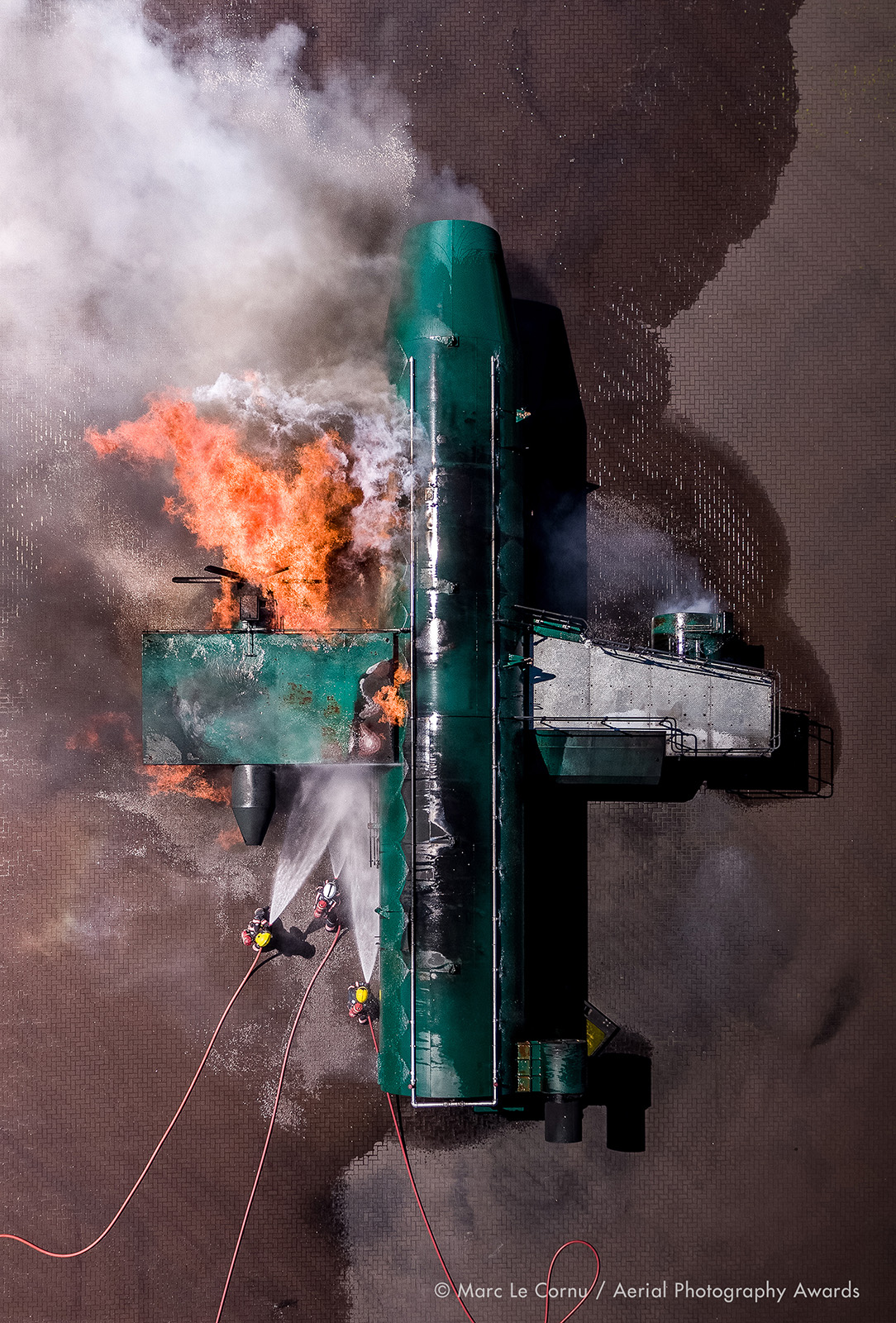 Fairway Of The Gulf Of Finland

In the Transportation category, the first place goes to a photo of ​a merchant ship navigating in the middle of the ice in the Gulf of Finland​, shot by Russian photographer Alexander Sukharev. 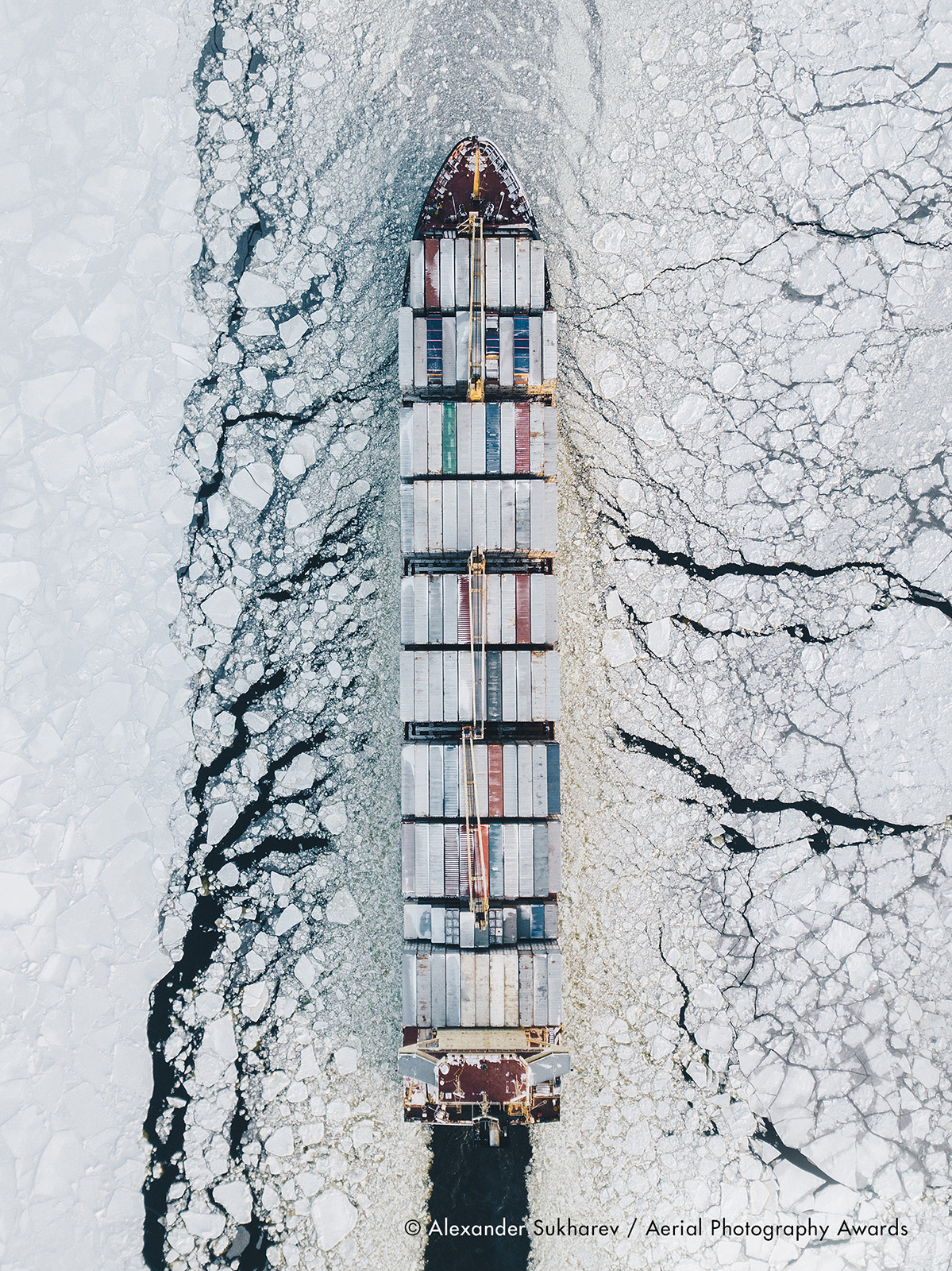 Joel Jochum’s enigmatic ​image of an energy storage facility in Germany​ received the jury’s best votes in the Industrial category. 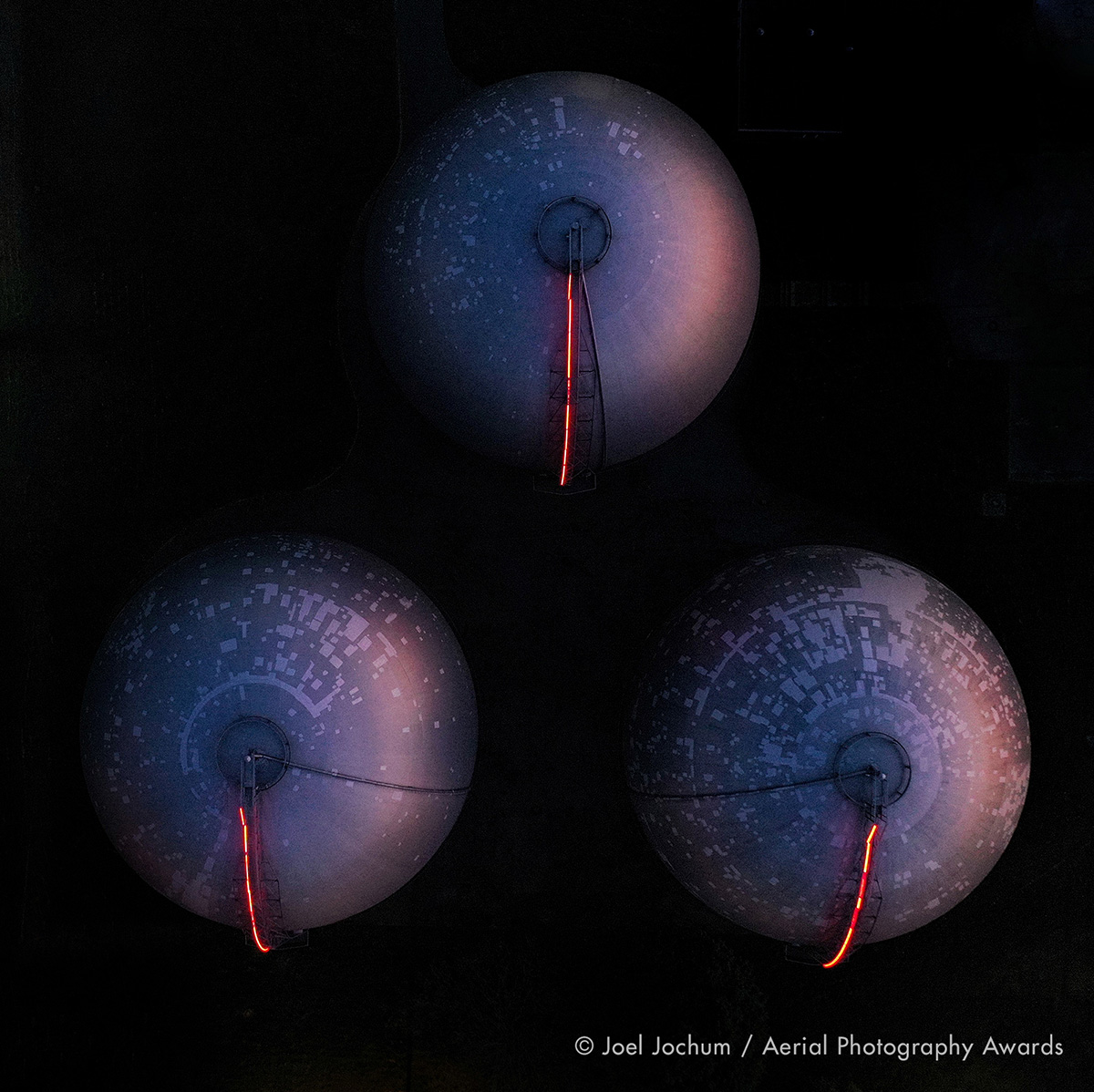 Chinese photographer Hua Shang’s ​image of a group of flamingos flying over Lake Natron​ in Kenya was chosen by the Jury in the Wildlife category. 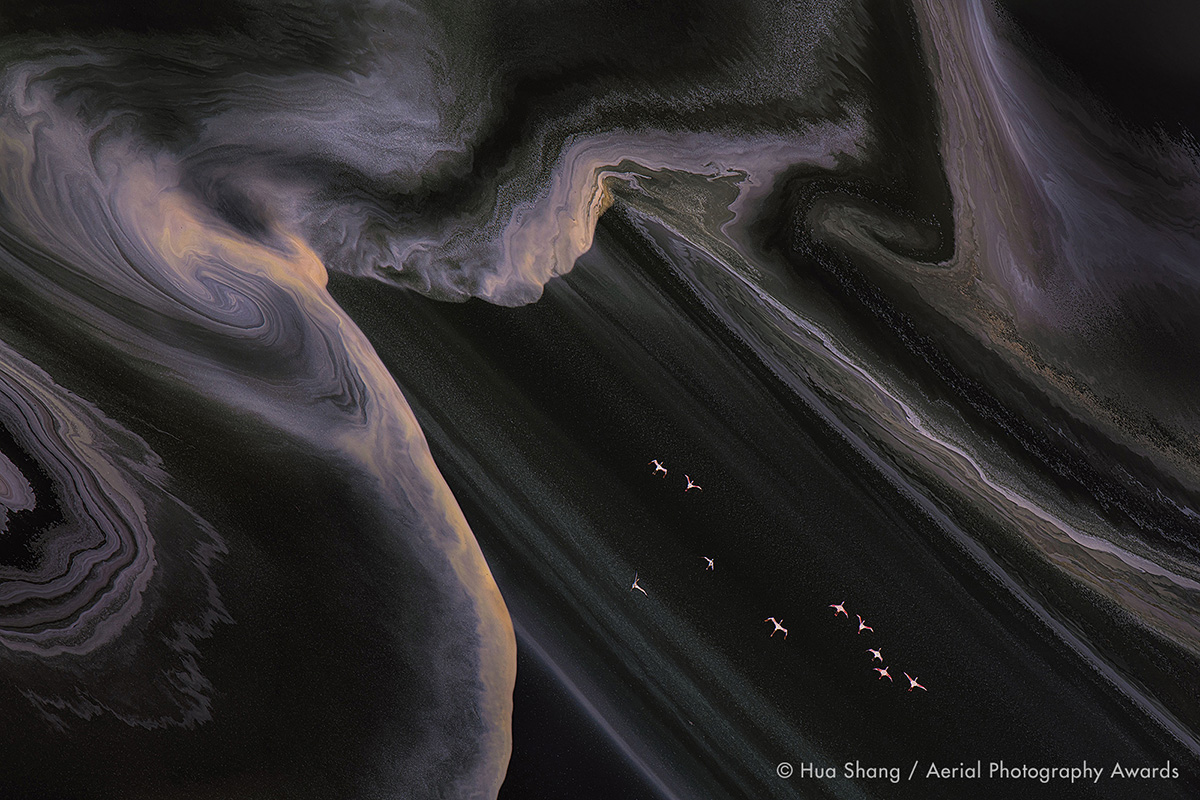 We Are In It Together

In the World in Lockdown category, dedicated to photos that deal with the consequences of the Covid 19 pandemic, the picture of the Indian photographer Prabu Mohan, depicting a ​building in Vietnam whose windows were all covered with the national flag​ as a sign of support, won first place. 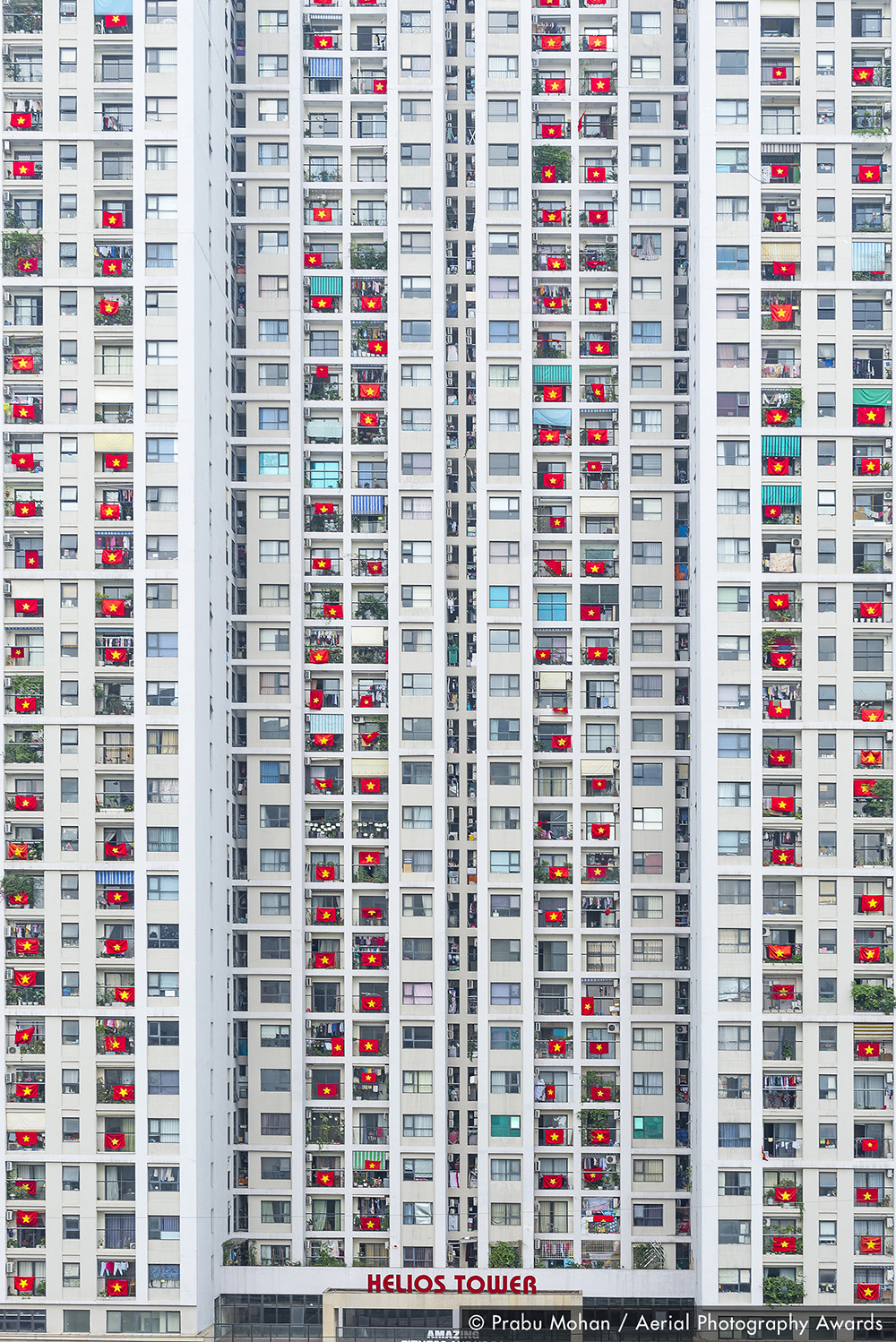 In the Waterscapes category, the image of the UK based photographer Kyle Vollaers of ​a surrealist iceberg drifting off the coast of Qeqertarsuaq, Greenland​ was awarded. 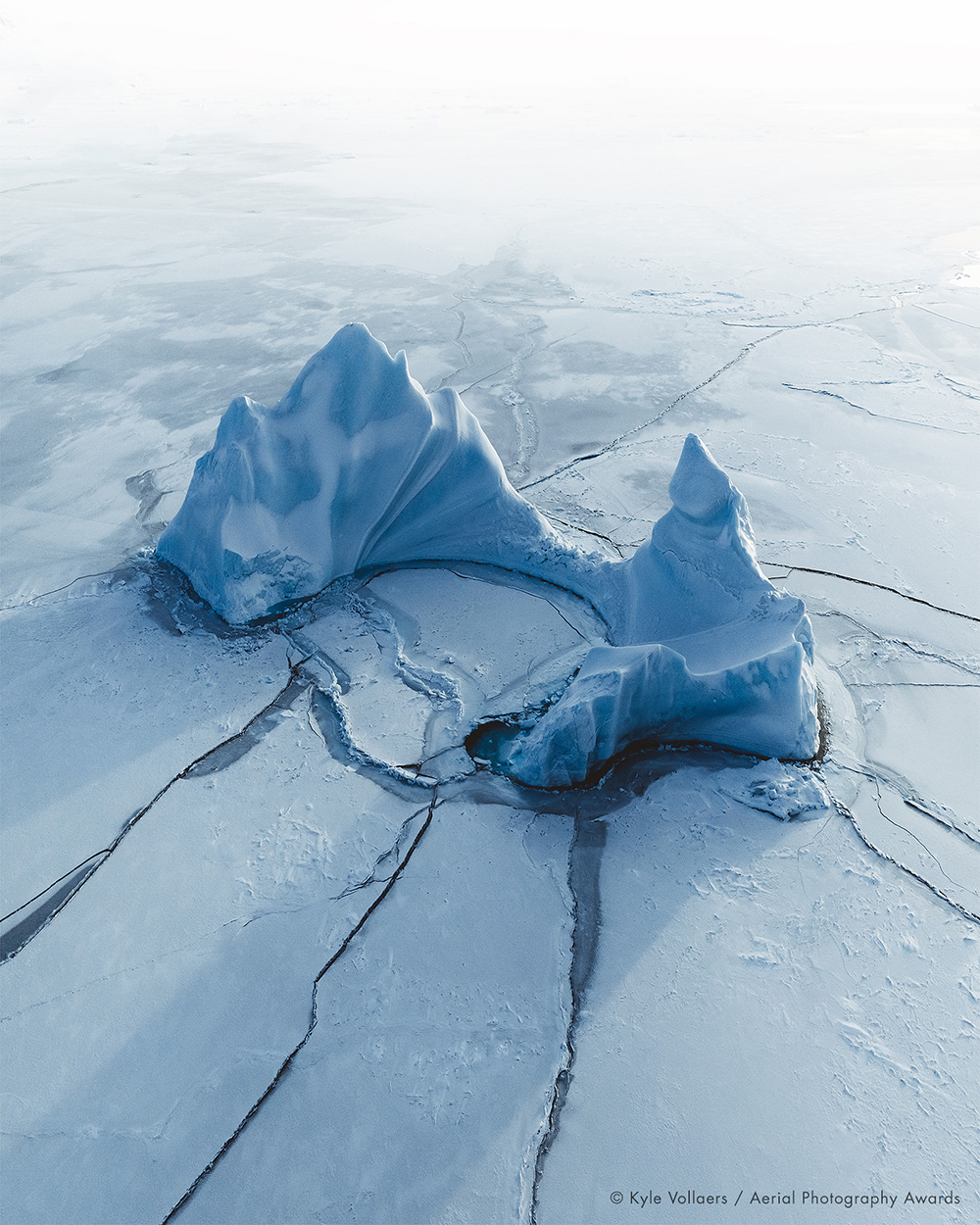 The photo of a WWI ship ruin on the French coast​, photographed by the Belgian photographer Reginald Van de Velde received the best votes from the Jury in the Abandoned Places category. 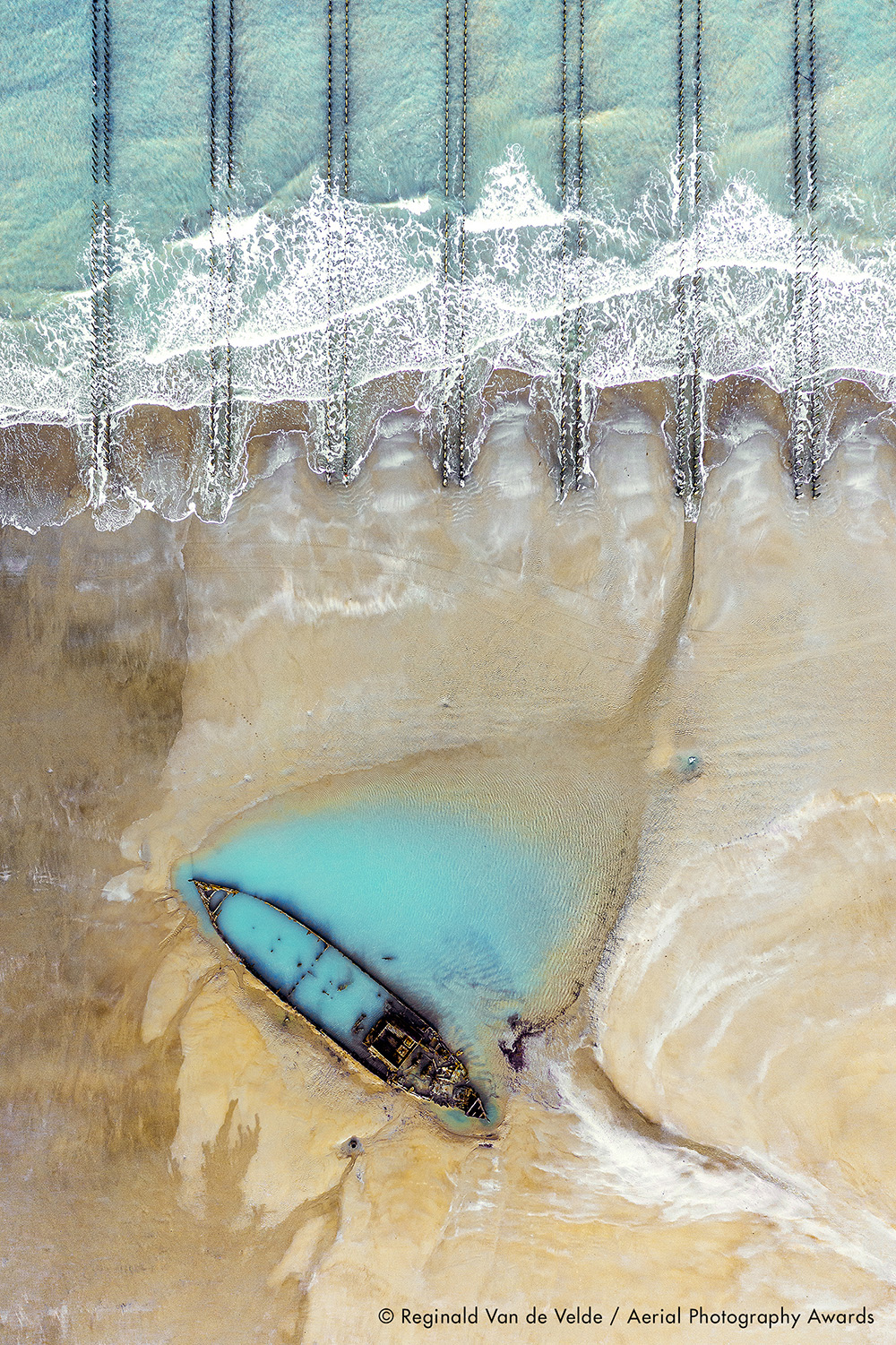 The Chinese photographer Yiran Ding and his photo of ​Shanghai seen through an airplane window​ won the Travel category. 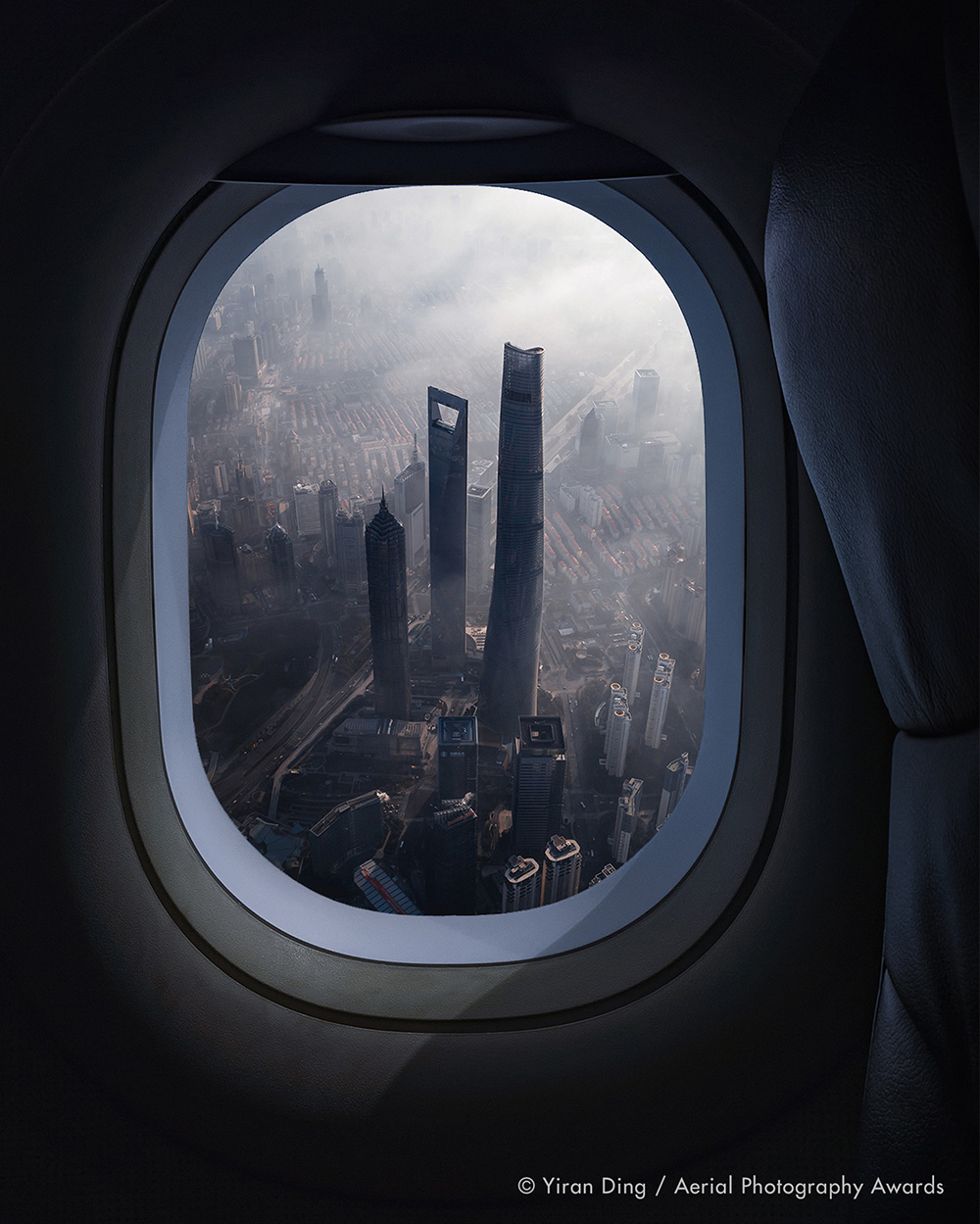 In the Architecture category, it’s the photo of the Belgian photographer Sebastien Nagy, portraying ​an almost abstract cityscape​, that takes the first place. 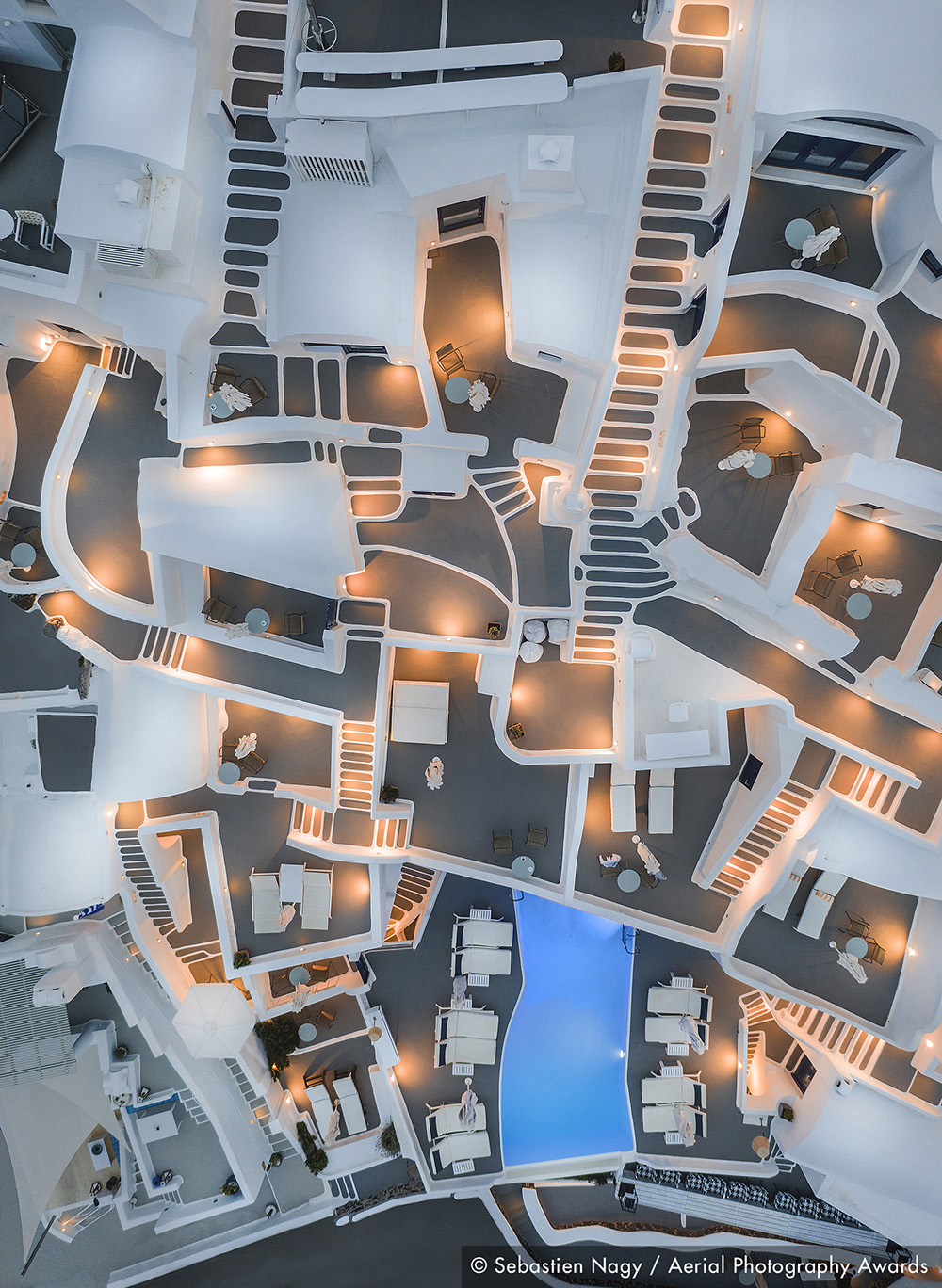 In the Sports category, it is a refined photo of a tennis player ​”Ball up”​ , by Australian photographer Brad Walls, which seduced the Jury. 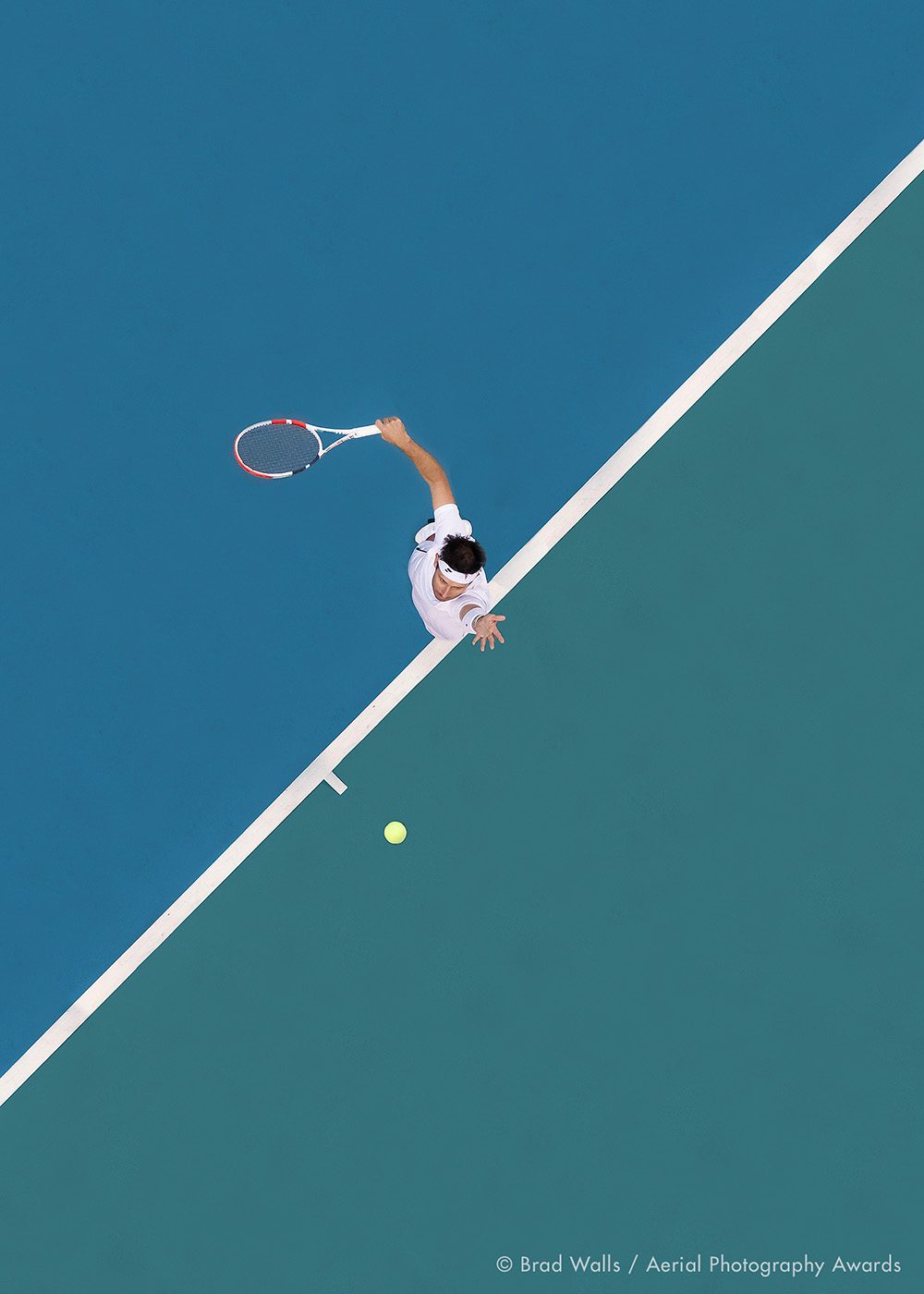 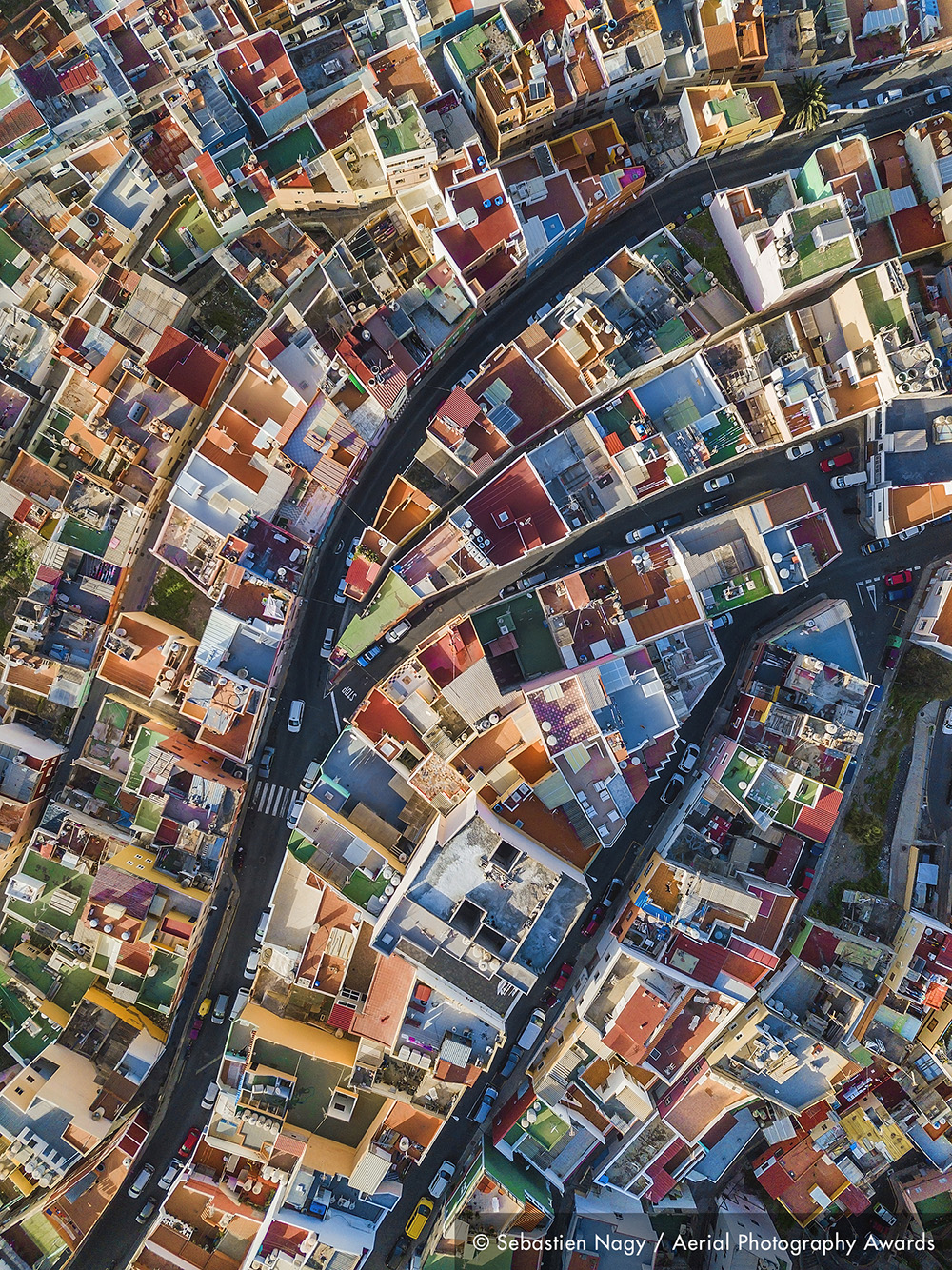 In the Constructions category, it’s ​a photo of the Dubai Frame​, known as “the largest photo frame in the world”, photographed by the Lebanese photographer Bachir Moukarzel who is in the first place. 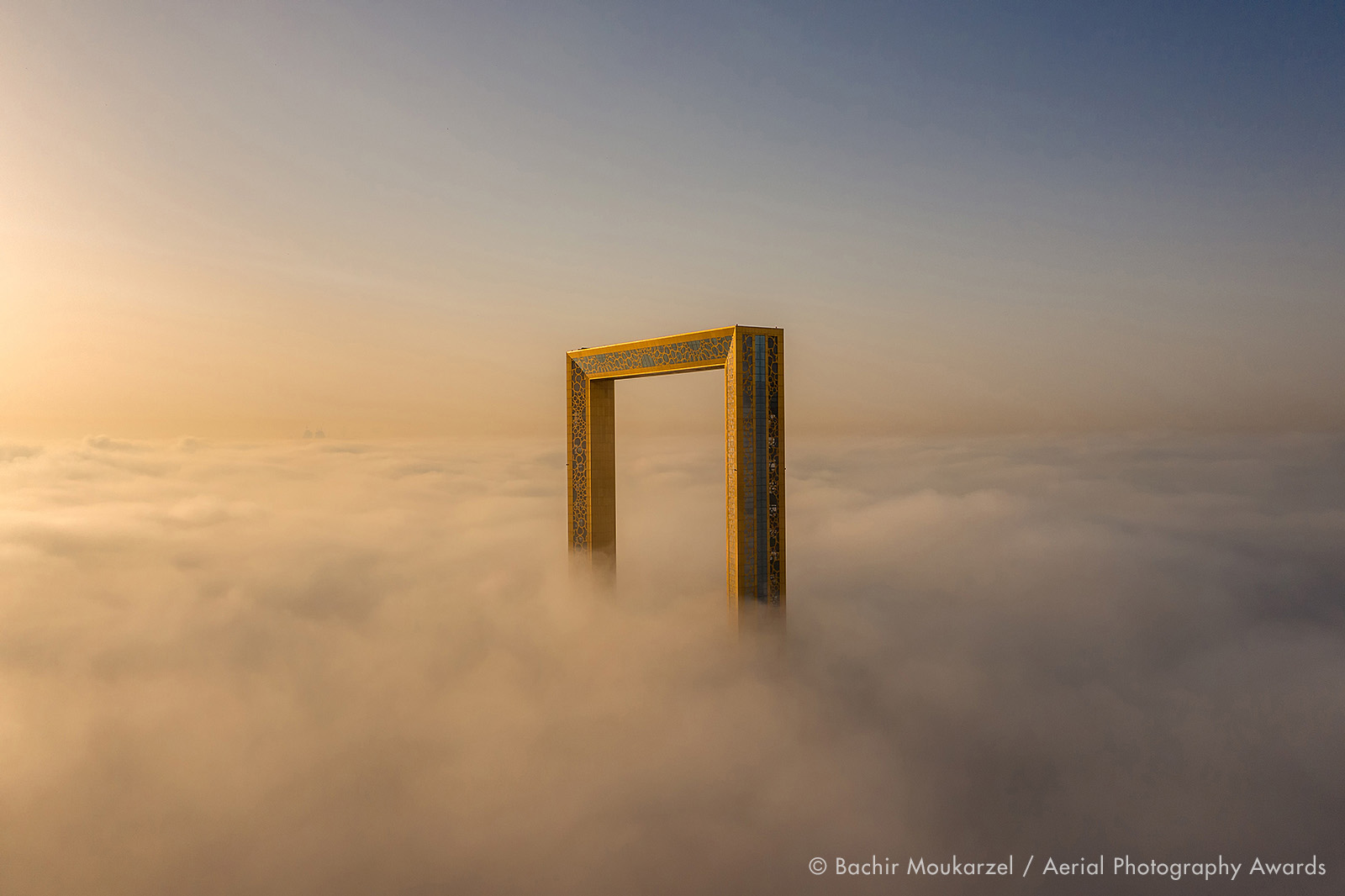 In the category Trees & Forests, ​the photograph of a herd of sheep crossing an autumn fores​t by Mehmet Aslan won first place. 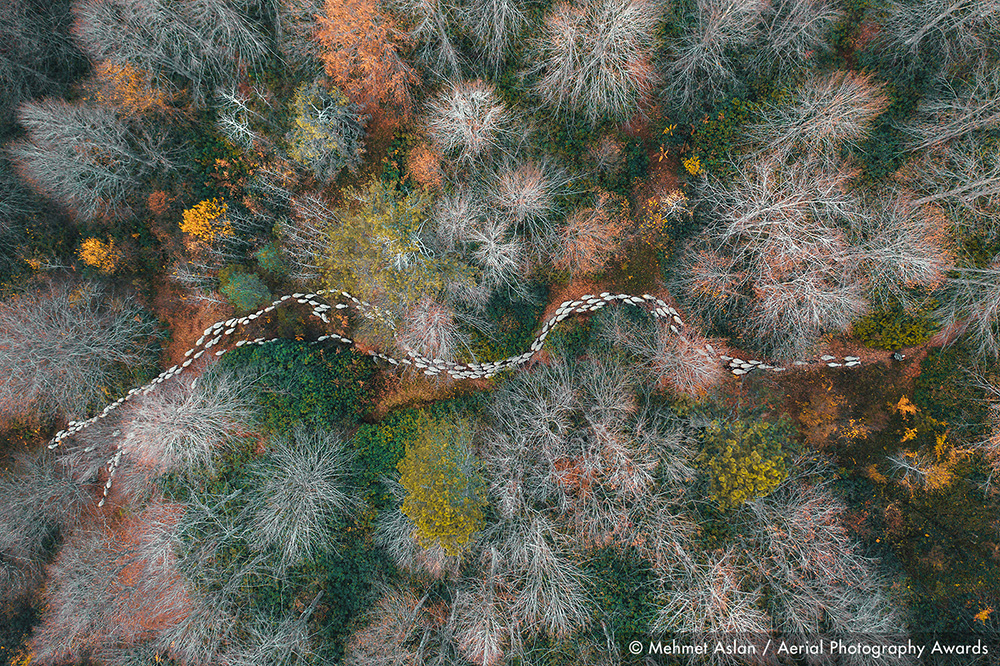 In the Environmental category, ​the photo of farmers in the middle of a field devastated by floodwater​, taken by the Bangladeshi photographer Azim Khan Ronnie received the best votes. 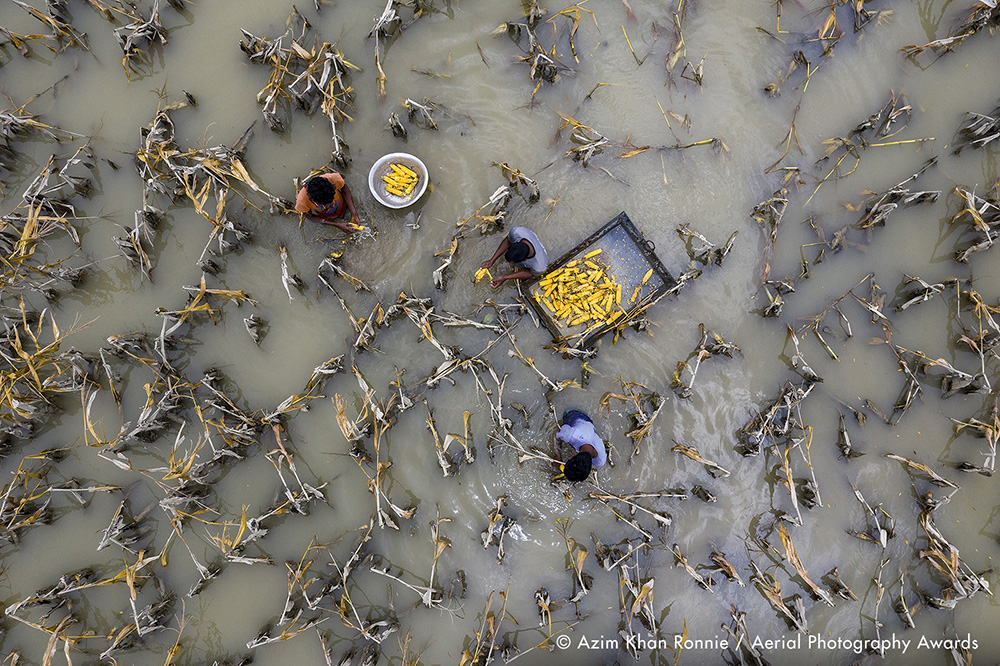 It’s ​the series of montages made from hundreds of aerial photos​ by the Brazilian photographer Cassio Vasconcellos in the Digitally Enhanced category that caught the attention of the Jury. 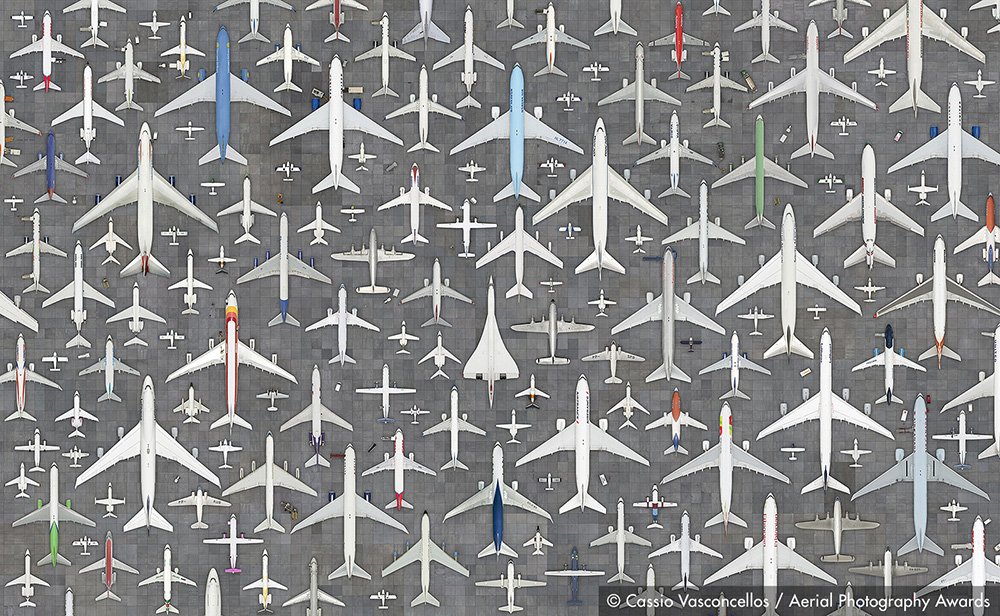 ​The poetic photo of a child trying to grab a plastic bag​ by Canadian photographer Ryan Koopmans won first place in the Fine Art – Other category. 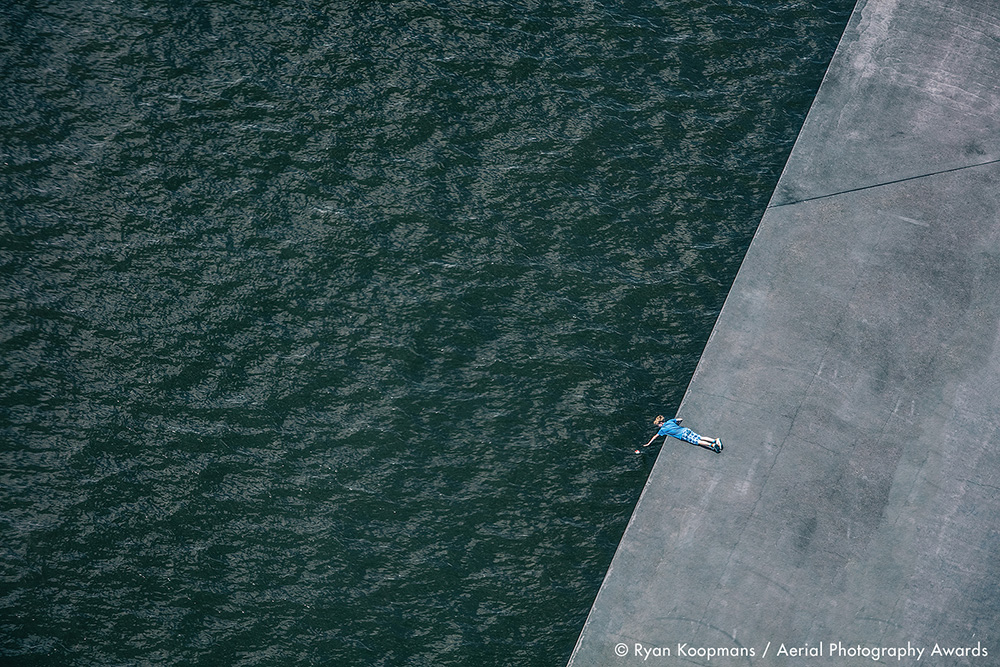 In the Landscapes category, it’s ​a landscape from another world​, shot in the highlands of Iceland by the Swiss photographer Sebastian Müller, that is best voted. 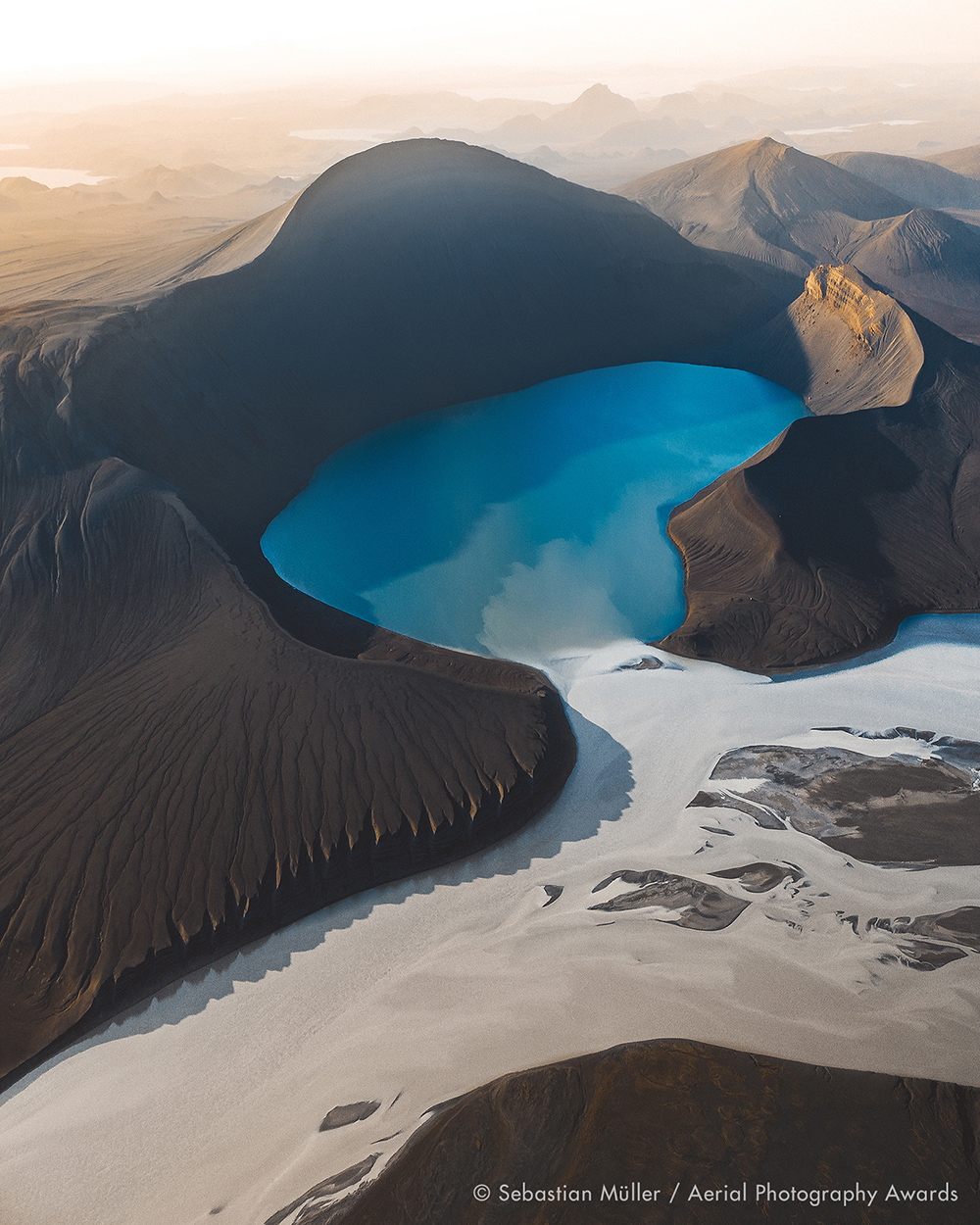 In the Abstract category it’s ​a photograph of the Tatacoa desert in Colombia​, shot by the photographer Johan Vandenhecke, that is best voted. 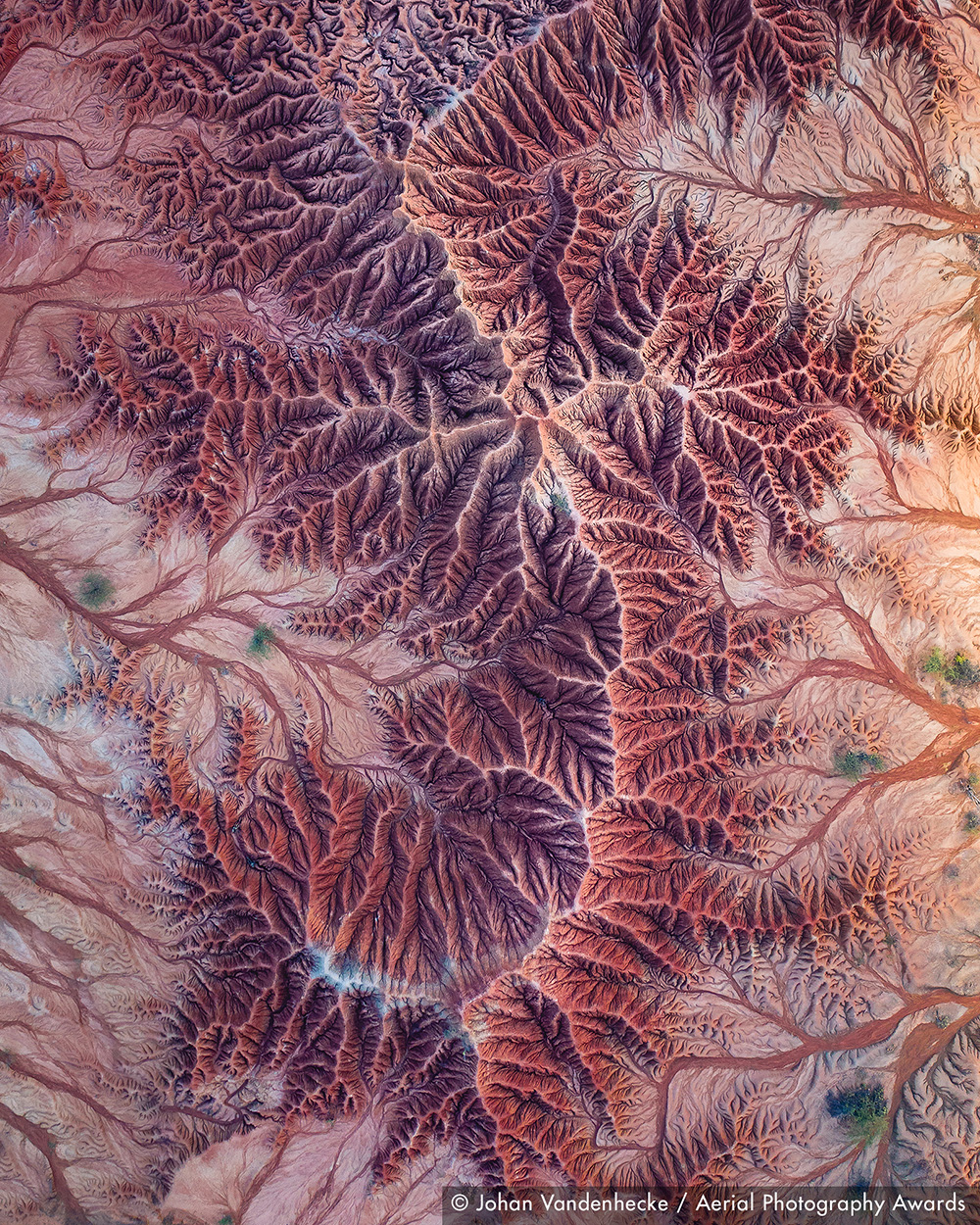 In the World culture category, it is a photo of ​600 000 devotees participating in the largest Eid-ul-Fitr congregation​ in Southeast Asia, taken by the Bangladeshi photographer Azim Khan Ronnie. 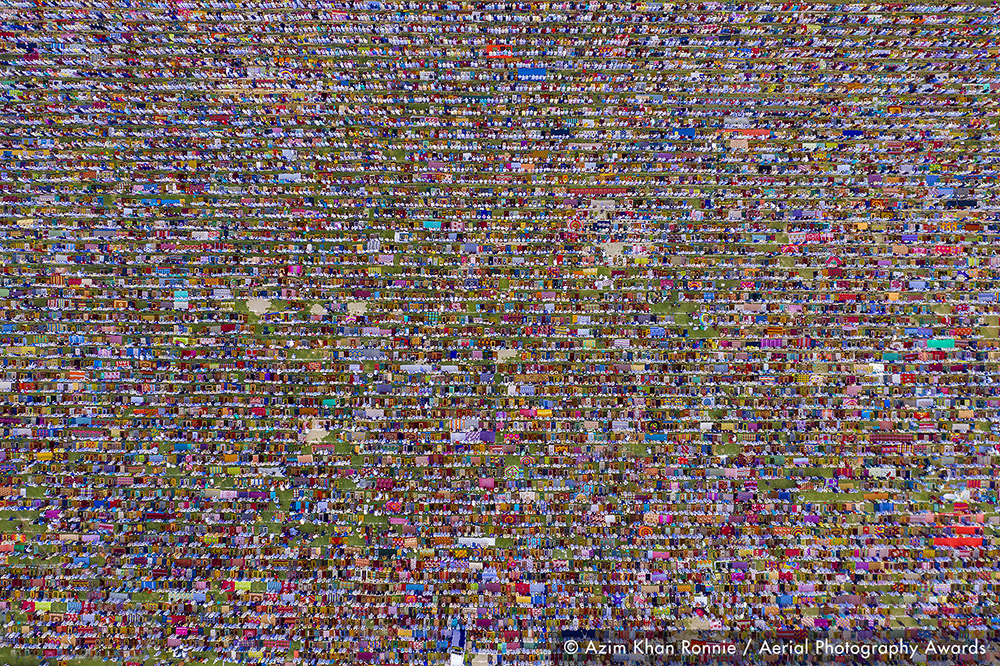 In the Patterns category, ​a photo of multiple umbrellas crossing each other in the streets​, taken by Japanese photographer Daniel Bonte won the first place.

In the Accommodations category, the Jury chose ​a minimalist and colorful photo of the apartments of the Burj Khalifa​, taken by the German photographer Kevin Krautgartner. 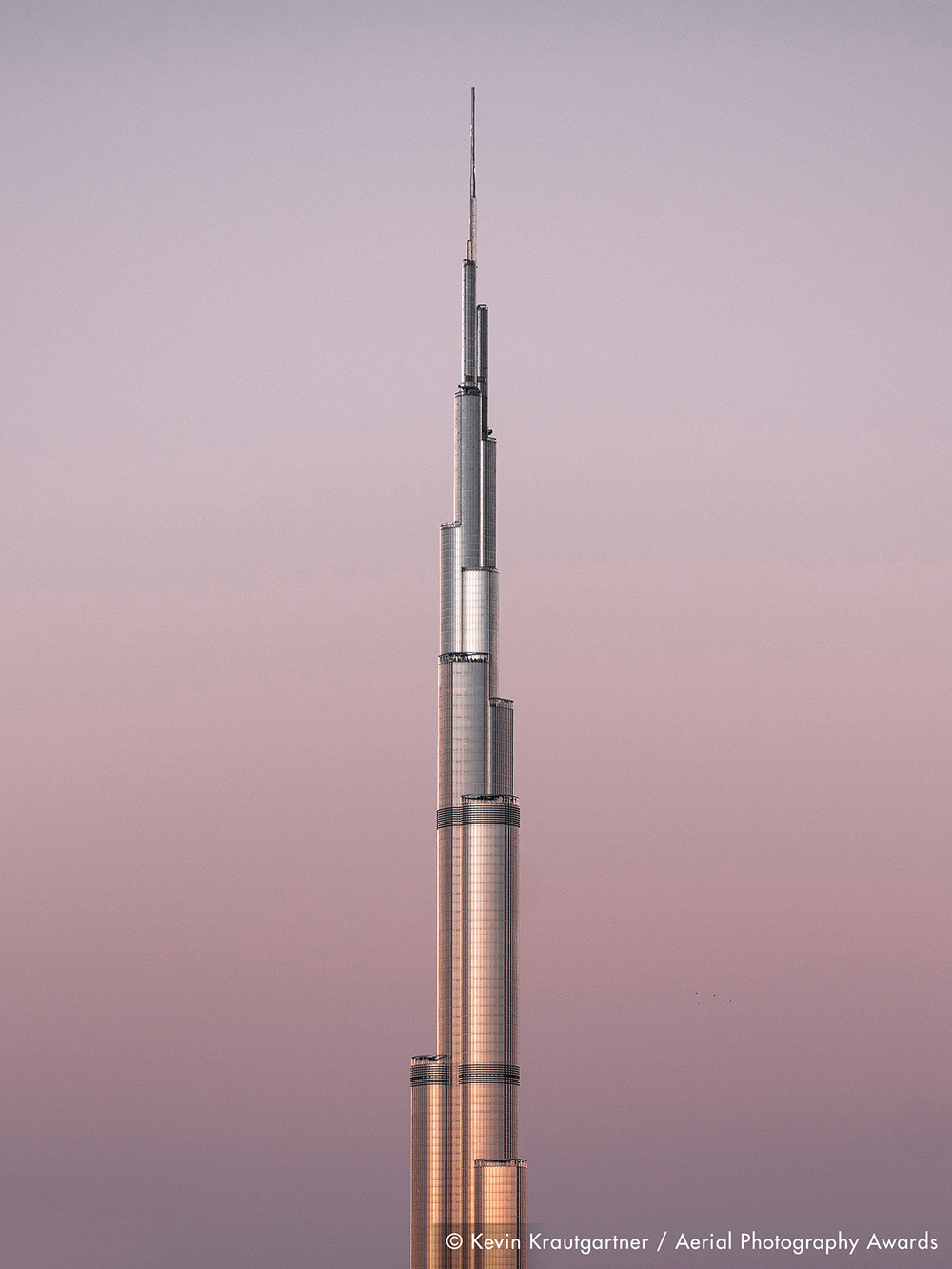 In the Hotels category, ​the photo of clean white lodgings​, shot in a hotel located in the Greek islands by Sebastien Nagy won first place. 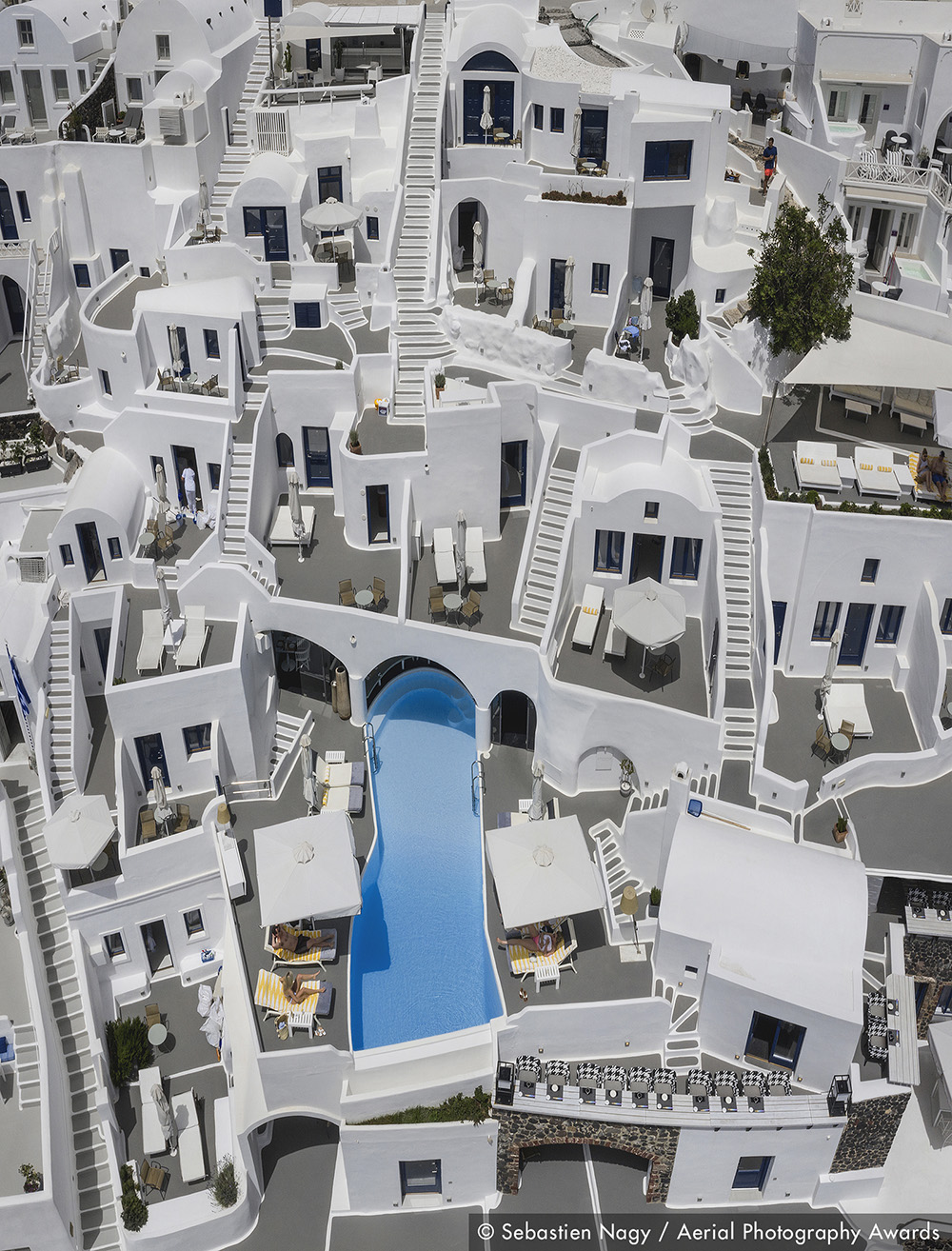 Thien Nguyen’s shot captures smoke billowing from the engine of a fishing boat along the Phu Yen coast in Vietnam. Beneath the surface, green nets cast out in search of anchovy are illuminated. 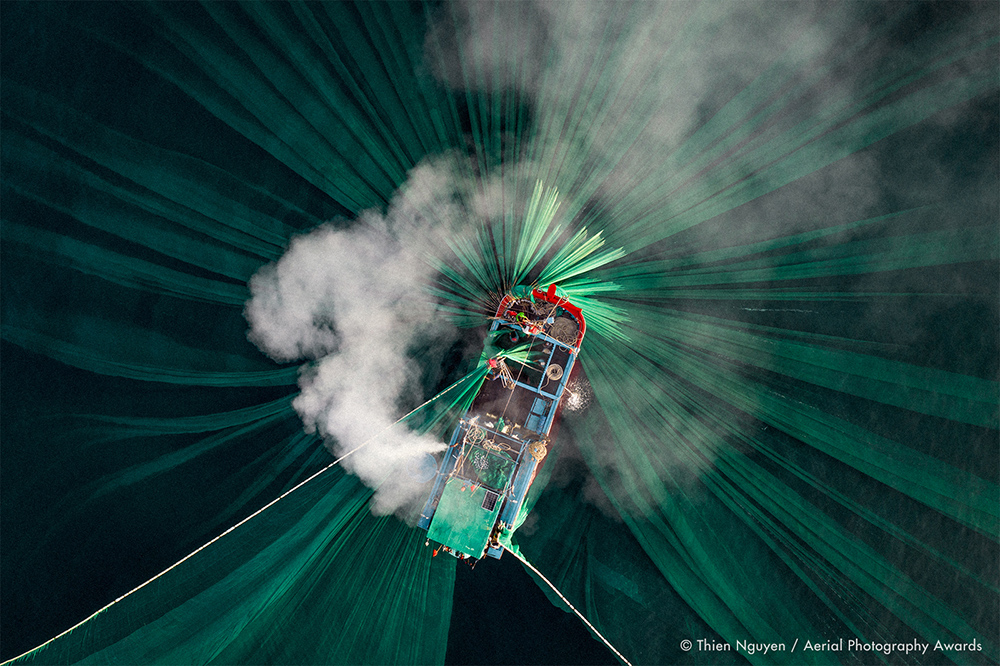 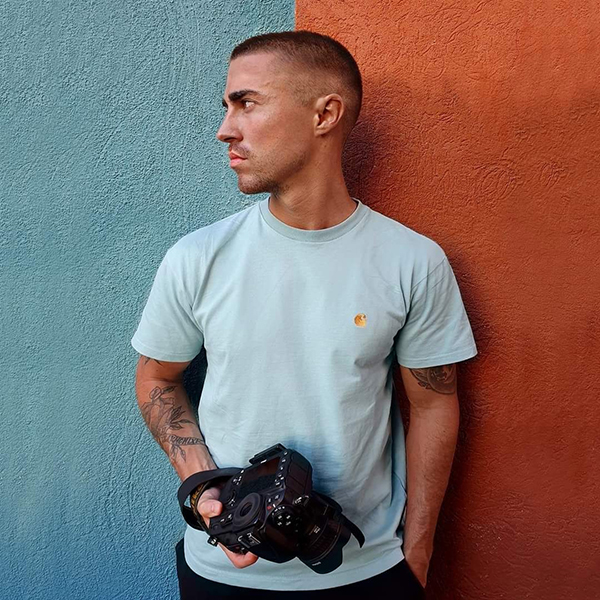 The winner of the title “Aerial Photographer of the Year 2020”, goes to photographer ​Sebastien Nagy​ (Instagram) from Belgium. Thanks to several awarded photos in different categories and a high average score.

His thoughts after receiving this award:
“​To be honest, I had never participated in a contest before, but I had heard about this one in a very positive way, so I took part in the game. I didn’t think I would win anything and it was mostly for fun. So I was very surprised when I heard the good news. It was a bit hard to believe at first as it was the Grand-Prix, but I did feel a real joy and pride. To be named first in a contest where the theme is what we love most, our passion, is incredible and very satisfying! This award made me want to test myself in other things and why not, to be able to judge others in my turn one day 😉 .”

The Founder of Aerial Photography Awards, Christophe Martin says: ​”For a first edition, the quality and diversity of the awarded photos demonstrates the evolution of aerial photography and the standards it has reached today. Aerial photographers prove their ability to amaze us. New visual writings are being built.

Thanks to the participants and to the Jury, the 22 categories create a panorama of the most exciting aerial photography currently being made. This is a unique source of inspiration for photographers, drone pilots, content creators who seek new perspectives.”

Head over to aerialphotoawards.com and have a look at all the other awesome aerial shots!
What do you think? Are you into aerial photography? Let us know in the comments!

If you want to support our work you can 1.) share it with the people you love, 2.) buy us a coffee, or 3.) become a monthly member and help us to make the page ad free.

Sign up for our newsletter and get the latest news and articles straight to your inbox.

Get Your Bonus Tips